Writing and Photos by: Alexandra Urban

May 15, The Capitol Theatre. A little bit after 7 pm, I played with my hair nervously as I approached Tobias Fo— I mean, Cardinal Copia— before Ghost was set to perform at 8 pm. I stepped towards him, giddy with excitement on the inside.

“Hello,” he said softly, his voice tinged with a Swedish accent.

I, surprisingly calm, but still a tiny bit nervous, responded with “Hello! It’s so great to meet you, I love your music, it’s an inspiration! Could I have a hug?”

Sure enough, I did get a hug— and a photo. The concert hadn’t even started yet, but I was already in a state of blissful euphoria because I had met a personal hero of mine in the realm of metal: Tobias Forge, the man behind the mask in Ghost. Let’s backtrack a little bit; Ghost is a Swedish metal/hard rock band formed in 2006 in Linköping, Sweden. The band was, and to an extent, still is known for its anonymity, although Forge officially “unmasked” himself in August 2017 on Sverige Radio P1.

Ghost released their debut album, “Opus Eponymous” on October 18, 2010, though the release was pushed back to January 18, 2011 in North America. The second full-length album “Infestissumam”, as well as EP “If You Have Ghost” were released in 2013. In 2015, Ghost presented their fans with their third album, “Meliora”. Their second EP titled “Popestar” was released in 2016, featuring the hit single, Square Hammer. Although the band has been on tour numerous times, they recently produced and released their first live album —”Ceremony and Devotion”— on December 8, 2017. Ghost’s vast repertoire is diverse and has evolved since their Opus days, but their characteristic sound and feel —along with their image, of course— have remained true.

At first glance, many people might scorn Ghost for their outrageous outfits and band image. Vocalist Tobias Forge himself masqueraded as “Papa Emeritus” (I, II, and III, respective to each full-length studio album), wearing an elaborately painted skull-like mask and a pope’s robes. The other band members are “Nameless Ghouls”, with each instrumentalist receiving an alchemical symbol based persona. Fire (also known as “Alpha”), lead guitarist; Water, bassist; Wind, keyboardist; Earth, drummer; Ether (also known as “Omega”), rhythm guitarist. The Ghouls wear full-face horned metal masks, in addition to black pants, shirts, and jackets. Nonetheless, the band has made it clear that this image is purely satirical.

Persona and costume changes occurred with the release of each full-length album and subsequent “end” of that album’s era. For example, Papa Emeritus I “retired” at the end of the Opus Eponymous era and was “replaced” by Papa Emeritus II. This constant “replacement” is often confusing for new fans, so long story short— Tobias Forge was and still is the man behind the mask, and he performs all the band’s lead vocals. The “changes” in vocals is just another theatrical twist that adds a fresh and fun element to the band.

As of 2018, though, the chain of succession featuring Papa Emeriti frontmen has been broken by a new contender— Cardinal Copia. The “new” frontman’s vocals will be featured on the upcoming album “Prequelle”, set to be released on June 1, 2018. Rats, a single taken from the album, premiered on April 13 and received generally favourable reviews.

In preparation for the release of the new album, and fondly titled after the name of the single, the Rats! On the Road tour was announced around the end of February. I, being a huge fan of the band since January 2017, immediately purchased a ticket for the show at the closest venue; The Capitol Theatre in Port Chester New York. I had previously seen Ghost perform as the opening act for Iron Maiden at the Xfinity Center in Mansfield, MA in July 2017. That had been my second time seeing Iron Maiden, and although they played incredibly, I had been more excited to see Ghost and hear their opening set, though it had been short. Therefore, being a part of “An Evening with Ghost” at a grandiose theatre in New York was truly a dream come true for me.

Fast forward again to the moment just after I had met the Cardinal— I wove my way into the immense crowd gathering at the foot of the stage, and managed to secure a spot in the fifth/sixth row of stage centre, although by the very end of the show, I had actually managed to make my way into the second row. As most metal concerts tend to be, the Ghost show was general admission. I waited eagerly, checking my phone every few minutes for the time. Finally, at around 8:30 pm or so, the curtains parted like the red sea as one of the instrumentals from the new album —Ashes— finished playing, and the band immediately transitioned into the opening notes of Rats.

My eyes swept across the stage, observing each band member in turn; Cardinal Copia roamed the stage; Alpha and Omega were at their respective ends of the stage, Water in the centre, between Earth and— at this point, I saw not one, but two Ghoulettes on keys. Not only this, but there was an additional guitarist to the left of Earth and his drum kit. This made for a total of seven instrumentalists— eight members total, including the Cardinal!

Having more instrumentalists leads to there being more complexity within the music— simply put, the chances were higher for somebody to mess up. But because Ghost are an incredibly talented group of musicians, they all played flawlessly. The stage presence and energy of the band were through the roof.

The Cardinal also incorporated numerous costume changes throughout his performance, changing into various zoot suits (fedora and cane included, of course) and cardinal robes. The band’s technicians also provided a thrilling light and smokeshow. After changing into his Cardinal robes, Copia brought out a thurible and began to wave it whilst on stage. Soon, the air was thick with the fragrant smell of incense. At one point, confetti and money— or rather, “Infernal Reserve Notes”— rained down from the heavens, taking the crowd by surprise. Many of these theatrics added a nice touch to the show, making Forge’s performance even more convincing, and hyping up the audience.

One unfortunate event that the crowd’s energy and eagerness led to was a mosh pit. Now, I’m not the tallest nor the strongest person, and I like to avoid mosh pits at all costs— they’re wild and can be dangerous since people are flailing and jumping around. I was pushed around roughly from behind, though the moshing was not happening directly behind me. Most of my fellow fans were just bracing themselves and trying to stand their ground like I was. The moshing got really intense during some songs, and being pushed by random strangers detracted from the experience a little bit.

Nonetheless, I thoroughly enjoyed myself at the show. The moshing couldn’t stop me from belting out the lyrics to many of my favourite songs: Cirice, Deus in Absentia, Year Zero, He Is, Square Hammer, and more. The acoustic version of Jigolo Har Megiddo was phenomenal; it was performed as a shuffle, according to the Cardinal, who instructed the audience to clap on beats two and four. The Copia’s dance moves are truly notable, and if anyone is interested in seeing them, I highly recommend that they watch the official music video for Rats.

Ghost played a whopping total of 24 songs including one encore across a span of nearly two and a half hours. The performance was also divided into two “Acts”. The first act consisted of 13 songs, with the second featuring the other 11 tunes. Additionally, six of the songs woven into the acts came directly from the upcoming album— that’s a whole 60 percent of new material off of “Prequelle”. The new songs played were Ashes, Rats, Miasma, Pro Memoria, Faith, and Danse Macabre. My personal favourite from this list (besides Rats) is Danse Macabre. It’s definitely a headbanger, and I feel that it has an old-school hard rock quality; catchy lyrics, thumping drums, and a wicked guitar solo among the other fantastic instrumentals.

Ghost never disappoints in their music or live performances. Their show at Port Chester was arguably one of the best concerts I’ve ever seen— and I’m an experienced concert-goer. It was truly a privilege for me to be a part of the audience during that show. I’m unbelievably excited to hear the rest of “Prequelle” (stay tuned for a review of the album once it’s released, hint hint!), and I wish the Cardinal and the Ghouls all the best during the rest of the tour. 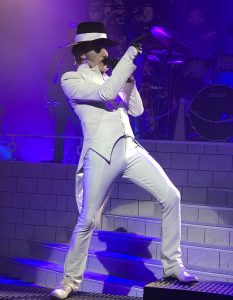 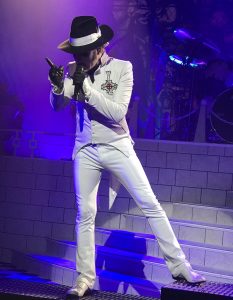 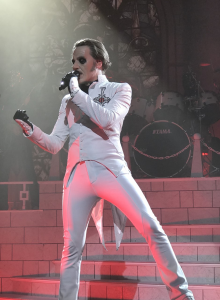 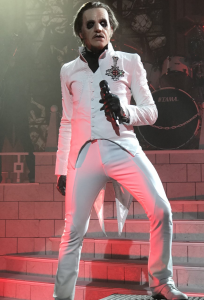 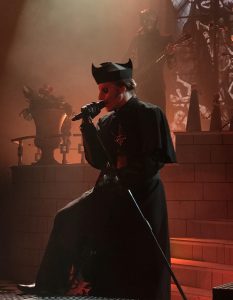 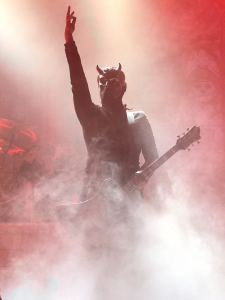 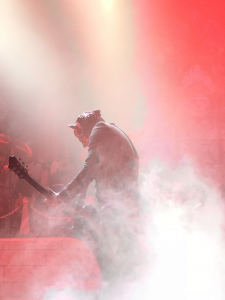 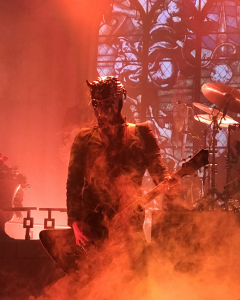 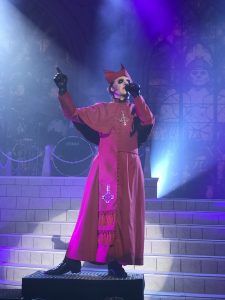 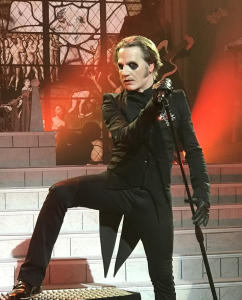 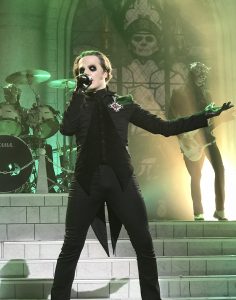 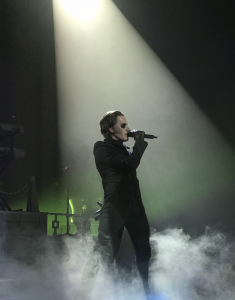