The Trump administration said Tuesday it is officially ‘winding down’ the Deferred Action for Childhood Arrivals (DACA) program, leaving undocumented students at the University of Connecticut with limited time under legal protection.

The president’s decision has evoked anger, uncertainty, and fear from many of UConn’s “DREAMers” – undocumented immigrants brought to the U.S. as children.

Enacted in 2012, DACA was an Obama administration policy that safeguarded 800,000 “DREAMers” from deportation. The Department of Homeland Security has stopped taking new applicants as of Tuesday, but will process applications received that day.

A fifth-semester student and DACA recipient, Tlacomulco’s parents brought her to the U.S. from Tlaxcala, Mexico when she was eight months old. She says she has spent the past few days “mourning,” and that she has been trying to “stay sane.”

In addition to her studies, Tlacomulco is politically active as a campaign organizer with CT Students for a Dream – a Connecticut-based group that advocates for undocumented students. She adds that undocumented students must take care of themselves during this time, saying that self-care is “very important.”

“[They should] definitely take care of themselves first, whatever that means. If it means to just sleep and not go to classes, if it means to be with your family and such, then that’s what needs to be done.” Stefan Keller, College Access Program Manager with CT Students for a Dream, says he understands that those affected need space, but also that the organization is focusing on what to do next.

“I think one of the things that we’ve committed to is that we’re going to keep fighting as we move forward, whether that be legislation – whatever that looks like. We don’t know what that looks like right now, but we know that we’re fighting for the whole community – not just DACA folks, but all 11 million undocumented folks.”

Activists from CT Students for a Dream took buses down to Washington D.C. Tuesday to march in support the DACA program. 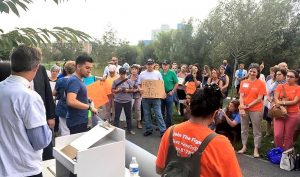 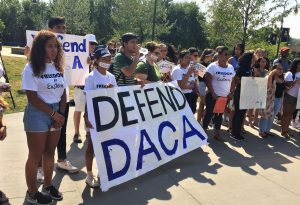 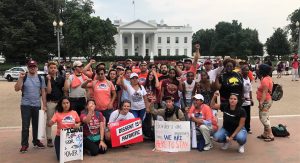 Caesar Valentin, co-coordinator of the Latinx Student Leadership Council, says he thinks Trump’s decision is unfair and that it “doesn’t make sense” to take away from the “DREAMer” students.

“These students are going to school, working, and contributing to the community, and it’s just not fair,” Valentin says. “You see how much pain is in their faces, and it’s very apparent how much this impacts people. These policies aren’t just policies; they’re people’s lives…”

What the Trump administration says

While making the formal announcement Tuesday morning, Attorney General Jeff Sessions called DACA “unilateral executive amnesty” and said the Obama administration “deliberately sought to achieve what the legislative branch specifically refused to authorize on multiple occasions. Such an open-ended circumvention of immigration laws was an unconstitutional exercise of authority by the executive branch.”

Sessions also sys DACA “denied jobs to hundreds of thousands of Americans by allowing those same illegal aliens to take those jobs.”

President Trump says he is leaving it up to Congress to create a legislative resolution for undocumented immigrants. He tweeted early Tuesday, “Congress, get ready to do your job – DACA!”

Congress, get ready to do your job – DACA!

Former President Barack Obama made a statement via Facebook in which he calls the decision “contrary to [Americans’] spirit” and says it was “self-defeating” to target young undocumented immigrants.

“These Dreamers are Americans in their hearts, in their minds, in every single way but one: on paper…” Obama says. He adds, “They are that pitcher on our kid’s softball team, that first responder who helps out his community after a disaster, that cadet in ROTC who wants nothing more than to wear the uniform of the country that gave him a chance.”

What the decision means

Administration officials say they will not revoke anyone’s DACA status before it expires. They also say anyone whose status expires March 5, 2018 has a month to apply for a new two-year permit.
If Congress does not keep DACA’s protections, about 300,000 undocumented immigrants would lose their status in 2018, and more than 320,000 would lose their status from January to August 2019.

Tlacomulco says she fears whether or not Congress will be able to create effective legislation in place of DACA.

“Perhaps there is legislation that would be able to solve this, but I’m scared that [it] will criminalize more and have more enforcement on the law, on immigration, [on] more deportations.”

Note: Jeff Sessions soundbite is a snippet from a video by The New York Times. WHUS News does not claim this soundbite as intellectual property.