The construction began in May, but Herbst says Wednesday marks the official kickoff ceremony for the construction and that she is grateful for the students who advocated for the new gym.

“Every other campus of our stature – our high stature – has a great [recreational] center where students can go [at] all hours to work out and be healthy and have fun,” Herbst says. “It’s been a gigantic hole in the campus, literally and figuratively, so I’m really glad that we’re finally getting to it.”

The center will cost about $100 million and will be on Hillside Road across from the UConn Bookstore, the spot where the Connecticut Commons residence halls previously stood.

The facility will have about 30,000 square feet of fitness space containing the following amenities:

Undergraduate students will not pay fees for the gym’s construction until it opens, and the project is currently on budget and on time, Herbst says. 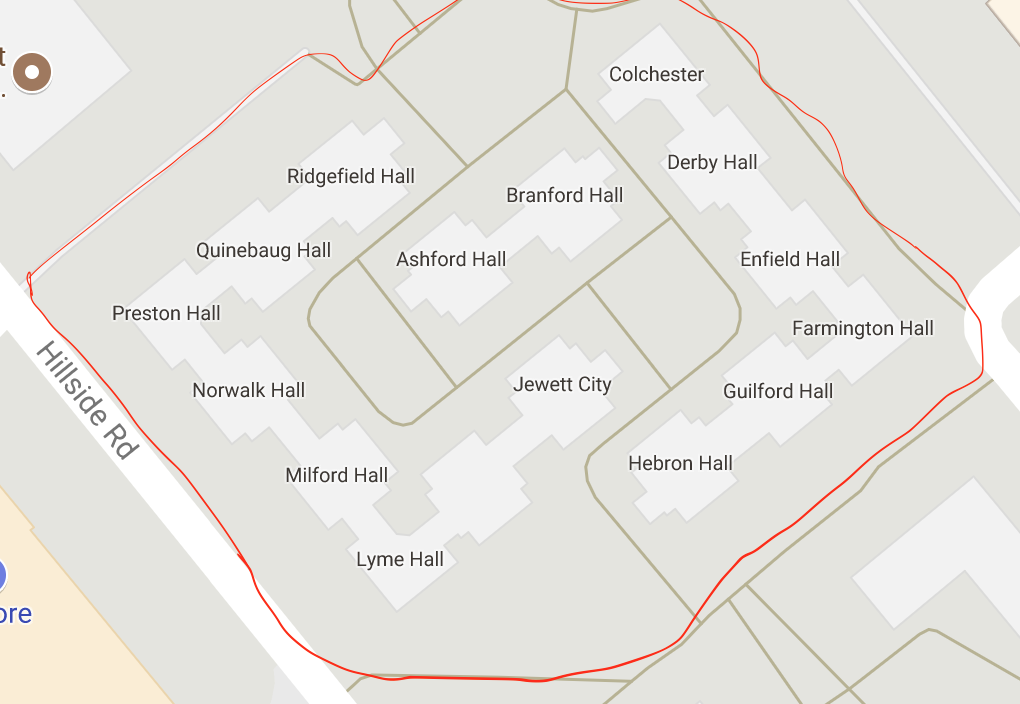 A map showing an approximate outline of the area where the new fitness center will be located. The center will be on Hillside Road across from the UConn Bookstore, the spot where the Connecticut Commons residence halls previously stood. The area of the grounds is about 91,000 square feet. Photo: Google Maps

A digital model of the new UConn recreational center. The center is scheduled to open July 2019. Context and interior models are on display in the Student Union. Photo: UConn Events

Herbst tells WHUS News she believes it is “vitally important” to have a good gym on a college campus.

“You guys, unlike previous generations, you really want to be healthy. You enjoy working out, being healthy, and I think you need that,” she says. “I think, you know, you study hard, you have a good time, but you also want to work on getting fit and being strong for the rest of your lives.” UConn President Susan Herbst speaks during Wednesday’s kickoff ceremony for the construction of the new fitness center. She says she thinks it will be the “nerve center” of campus “psychically, socially, and physically.”
Photo: Darden Livesay

Half of UConn’s current undergraduates will not be able to use the new gym before they depart, as only second-year students and below will be present for its opening; however, some older students still have a positive outlook on the situation.

7th-semester student Marc Lupinacci says although he will not be able to use the center himself, he is excited for the next generation of Huskies who will.

“I’m upset I’m [going to] miss it, but when I come back I can be proud to say that I saw where it started. I can’t believe where it’s come, where club sports is going, where UConn Recreation is going… this is going to be a great moment for all the students and all the people on campus.”

The university administration estimates the facility will achieve Gold status by standards of LEED – Leadership in Energy and Environmental Design, a certification program that evaluates new, commercial-building projects.

The gym’s steal construction will begin in October with a ‘Topping Off’ ceremony scheduled for April, 2018.

UConn Recreation Executive Director Cyndi Costanzo says the facility will be a “vibrant hub of activity” and a source of school pride for future generations.

“We look forward to serving the recreational needs of our students in this dynamic new facility and, more than ever, being the place where the student body develops.”